A Visit from Royalty 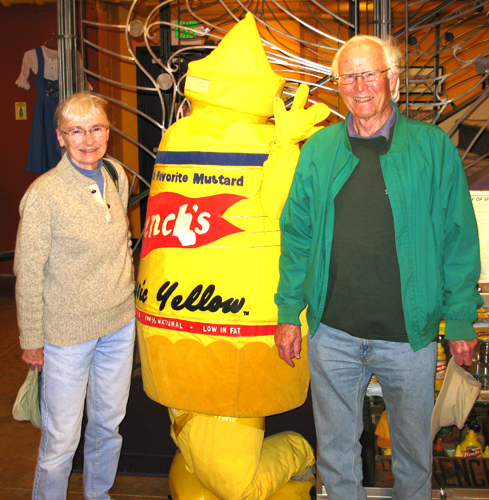 Joan and Rod Tinkler paid us a visit last weekend. What’s so “royal” about the Tinklers? Joan’s father was the late J.D. Cockcroft, father of French’s Mustard from 1941 through the late 1960s. They met in Rochester, NY, former HQ of French’s (at One Mustard Street), when Rod, who worked for Colman’s in England, was transferred to Rochester. Mr. Cockcroft invited Rod for dinner and Joan, who had just graduated from college, happened to be there.

It was “love at first squeeze,” although French’s was not yet in plastic squeeze bottles.

Joan remembers eating French’s mustard and Marshmallow Fluff sandwiches as a little girl. “I can’t really vouch for it now, ” says Joan, “I was ten years old and that’s what ten-year-old girls did.” Hmmm. We’ll try it and report back to you next week.

BTW — French’s Yellow Mustard is made now just the way it was then. Never had artificial ingredients and they promise it will stay that way.

This entry was posted in From the Gourmet Gift Shop. Bookmark the permalink.