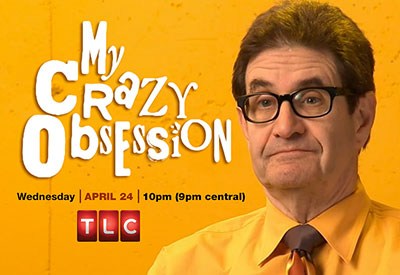 Mrs. Mustard says to the Curator, “Do not even mention the fact that you’re going to be on the TLC network show ‘My Crazy Obsession’.” She goes on: “Under no circumstances are you to tell anyone that it will air on Wednesday night, April 24, at 10:00 EDT (9:00 CDT).”

This is all in the genre called “reality TV.” As we all know, there is usually as much reality in “reality TV” as there are grapes in Grape Nuts.

But I am not supposed to utter even a word about this impending embarrassment.

(PSSSST! If you’re obsessed with mustard, too, you can grab a fix with our GR8 Best Sellers)

One Response to My Crazy Embarrassment