Oprah: Where Are They Now? 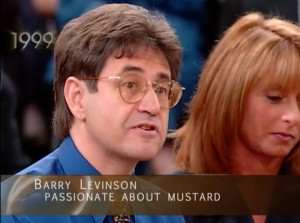 But since this appearance on the Oprah Winfrey Show in 1999, there have been a lot of changes — but still, a LOT remains the same. The original “Mount Horeb Mustard Museum” is currently located in Middleton, WI, and goes by the now-familiar moniker “National Mustard Museum”. The collection has ballooned to more than 5,900 mustards from all 50 states and over 70 countries. What has always remained the same since 1999 is the unwavering passion for mustard and mustard history that originally drove Barry to embark on this crazy, amazing journey all those years ago.

Oprah recently caught up with the Curator on her “Where Are They Now?” series on her network, OWN. Watch this short version of the segment that aired on October 29, 2016, and see the Curator talk about the Mustard Museum in 1999 and then get his update in 2016 (we’ll forgive Oprah for misspelling the Curator’s last name to resemble the famous Rain Main director’s spelling).

Watch Oprah Video
This entry was posted in The Curator's Curiosities. Bookmark the permalink.