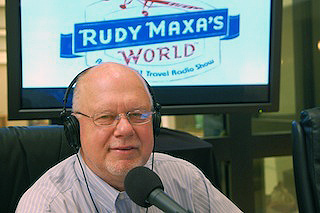 Saturday, May 10, at 9:43am CDT (exactly! It’s live radio…) the Curator will be on “Rudy Maxa’s World”, a nationally syndicated travel radio show.

Rudy Maxa’s World is broadcast weekly on 170+ stations in the US with an Arbitron-measured audience of 700,000 listeners – making it the most widely listened-to travel radio show in the US. Rudy Maxa is one of America’s premier consumer travel experts and the host and executive producer of “Rudy Maxa’s World,” the Emmy Award-winning public television travel series featuring destinations as diverse as Korea and Argentina, and from South Africa, Tuscany, and Thailand. Maxa is host and executive producer of 91 television episodes on the world’s great destinations that air on PBS stations nationwide. His television episodes also air in 121 countries in 22 different languages on Travel Channel International.

Make sure you mark your calendar for this Saturday to listen to the Curator and Rudy talking mustard, travel and everything Mustard Museum.

Rudy’s show starts at 9:00am CDT Saturday morning. You can listen live or if you miss the live show you can listen to the podcast available via iTunes.

Listen LIVE!
Rudy’s Podcasts
This entry was posted in From the Gourmet Gift Shop. Bookmark the permalink.