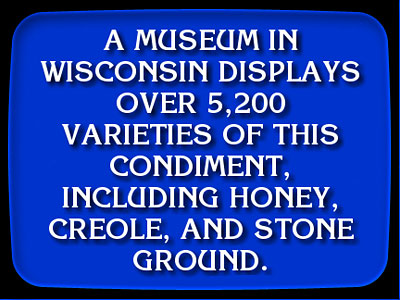 “What is mustard?” That was the ‘question’ to the ‘answer’ on the iconic syndicated game show, Jeopardy! The episode that aired Tuesday, December 4, 2012, featured that golden question-answer.

The category was “A Bit of Honey” and the question-answer was worth $800. The contestant who answered it correctly was a lawyer named Jennifer.

We are asked from time to time how things like this come about and how we know we’ll be on shows like this. In the case of Jeopardy!, a fact checker for the show called earlier this summer asking questions about the Museum in general. Then, last week we got a call from someone at the show letting us know we were going to be mentioned in a question-answer on Tuesday’s show.