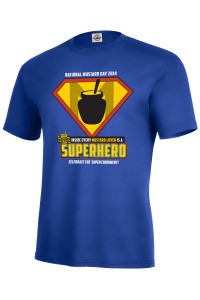 Well, at least your super t-shirt is ready for you. The 2014 National Mustard Day t-shirts are in production and will be ready to ship on Monday, July 28 — in plenty of time for NMD2014 on Sat., August 2.

Whether or not your friends think you’re all that super really doesn’t matter. Because we know. We know that “inside every mustard lover is a superhero”. How could there not be? With all the documented evidence that mustard is a healthy addition to any meal, there’s simply little doubt that mustard is THE supercondiment.

Celebrate the Supercondiment with this gorgeous commemorative royal blue t-shirt. Sorta like the blue that guy from the planet Krypton had for his outfit. We’ve been celebrating the super-status of mustard for years and, in fact, a while back we babbled on about mustard in a way that would make even George Reeves* blush…

Who came to Earth with flavors and aromas far beyond those of mortal spreads.

Mustardman — who can change the taste of mundane salads,

Bend sausages with his bare hands.

And who, disguised as Barry Levenson, mild-mannered curator of a great metropolitan food museum,

Fights a never-ending battle for burgers, bratwursts, and the American Way.”

* For those too young to remember, George Reeves played the Man of Steel in the 1950s TV series. The Curator has every episode on DVD and had a major crush on Phyllis Coates, Lois Lane in the first season. But that was before he met Mrs. Mustard…