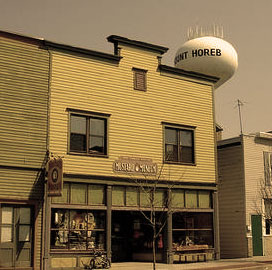 History of the Museum

“If you collect us, they will come…”

The National Mustard Museum began as the “Mount Horeb Mustard Museum” when its founder & curator, Barry Levenson, started collecting mustards on October 27, 1986. The story of the Mustard Museum traces its roots to a late night visit to an all-night grocery when Barry heard a deep, resonant voice as he passed the mustards: “If you collect us, they will come.”

Barry bought about a dozen jars of mustard and at that moment resolved to amass the world’s largest collection of prepared mustards. He continued his work as an Assistant Attorney General for the State of Wisconsin during his early years of collecting mustards. While in Washington, DC, to argue a case before the U.S. Supreme Court, he spied a mustard jar on a discarded room service tray in the hallway of his hotel. He took it. “I argued a case before the Supreme Court with a mustard jar in my left pocket,” he says. “We won.” Moments like that cemented his unwavering devotion to mustard. In 1991, Barry left the law to devote his passions full-time to collecting mustards and mustard memorabilia.

The Mustard Museum opened to the general public in Mount Horeb, Wisconsin, on April 5, 1992. With a burgeoning collection outgrowing its confining walls, the Museum moved to a more spacious facility across the street from the original Mount Horeb site in October of 2000.

From those few jars of mustard that Barry found in 1986, the Museum collection has grown to more than 5,624 mustards and hundreds of items of mustard memorabilia.

One of Wisconsin’s most popular tourist stops, the Mustard Museum has been featured on The Oprah Winfrey Show, The Food Network, HGTV’s The Good Life, and in the pages of dozens of national magazines & newspapers.